I didn't get excited about pulses (chickpeas, lentils, dried beans etc) until probably 8 or 10 years ago but these days they make a regular appearance on my daily menus. They are a terrific source of fibre and plant protein and make an excellent addition to many recipes from salads to stews.

You can buy pulses cooked and canned, or dried in packets for you to cook yourself. I use both but I prefer the latter for a couple of reasons: Apart from being cheaper, the dried and cooked at home product is superior in taste and texture,  is easier to store and creates less rubbish. Another advantage is that once you've cooked, bagged and frozen them you can use as many or as few as you like very easily.

I keep a selection of cooked pulses packaged in zip lock sandwich bags in the freezer and just pull them out as needed. Being small, they defrost quickly but you can throw them frozen into any hot dish or into a pan to saute. If you're in a real hurry you could defrost them in a microwave or under some hot water.

A tip I've picked up recently from the Arthur Street Kitchen cook and author of two of my favourite cookbooks,  (Community and Neighbourhood) Hetty McKinnon is that it is OK to add salt to the cooking water. It is a myth that salting the water makes the beans tough, but it definitely makes them tastier...as does the addition of sliced garlic.

I never bother cooking lentils prior to using them as they don't take long to cook anyway. On the contrary, in my experience you have to watch them closely lest they turn to mush, especially red and yellow ones....which isn't an issue if you're making soup or dahl.

One pulse I've discovered recently is lupins. When I say 'discovered' I mean in terms of human consumption as opposed to sheep feed. Last year I catered for a ladies long table lunch and wanted to feature local produce; a quest that led me to lupin flakes. Then of course I had to figure out what to do with them as, being relatively new on the human food scene, there are not too many published recipes using lupins. After I bit of experimenting I developed a recipe for lupin hummus and it must be alright because I've since had a number of requests for the recipe.  For the lunch I served it under chargrilled lamb ribs with a yogurt dressing which was pretty yummy, but eating it with raw veggie sticks and crackers works for me too! You can buy lupin flakes here. 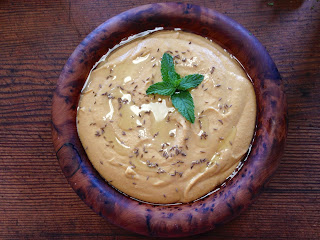 Bring all of the above to boil and simmer 6-7 minutes, lid off, until the water is absorbed.

Cool a bit then place in a food processor with:

Blend until smooth. Or you can put all the ingredients in a wide jug and blend with a stick mixer.

Serve in a flat bowl and sprinkle with toasted cumin seeds and a drizzle of good olive oil.

Store in the fridge.

Do you have any great pulse recipes to share?

Emma
I'm in my mid forties and live on a 130,000 hectare sheep station in Western Australia. My husband's family have been here since 1929 and he is a third generation pastoralist. Rossco and I have three adult children who love this property and lifestyle as much as we do. After family my two greatest passions are gardening and cooking, and because we are 200km from our shopping centre and our summers are scorchingly hot, both have their challenges at times....but that just makes life more interesting! Due to our relative isolation (I say relative because for a station, at 200km from town, we are actually pretty close to the suburbs) it can be hard to share produce from the paddock/garden and meals with friends, so I figured that writing a blog is a way of doing that, albeit virtually. I hope that by sharing what I've learnt, and am learning, others might be inspired to grow and cook real food for their families and have some fun experimenting with new (actually very old) ideas, like making cheese and sourdough bread. I'm hoping also to learn from my readers and look forward to reading feedback from you.